Athlete of the Week: Kai Thomas

Kai Thomas from Williston Trinity Christian School was nominated to be this week’s Athlete of the Week after putting up amazing stats for the Crusaders basketball team, averaging 20 points this season.

“Kai Thomas has averaged 20 points per game, 12.5 rebounds and 2.5 blocks to start out this season. He is currently shooting 82% from the free throw line, 40% from 3 point and 62% from 2-point range.” Head Coach Jacob Braaten said.

While the season is still young, Thomas’ red hot start to the season should be an indicator of what’s yet to come for the rest of the season.

The Williston Trinity Christian School boys basketball team won this year’s District 15 title. The Crusaders defeated the Trenton Tigers 62-60 on Feb. 28 and as a result of their win they are this week’s Athletes of the Week. On top of this, Colby Grindeland, Derek Lee and Kai Thomas were named to the All-Tournament Team. Grindeland and Thomas were named to the All-District Team as well. Now, the Crusaders will head to the Class B, Region 8 Tournament on March 7. They take on District 16’s Divide County in the quarterfinals starting at 3 p.m. at Williston State College. Also in the tournament from District 15 is Trenton, Parshall and White Shield. Representing District 16 aside from Divide County is Kenmare, Powers Lake and Stanley.

The WTCS boys and girls varsity basketball teams had the pleasure to join in on the first ‘Jr Rock’ basketball tournament in Regina, CA February 6-8, 2020.

A Year of Growth for WTCS Boys Basketball

Print“We are going to be a super young team this year.”

Those were the words of Williston Trinity Christian School head boys basketball coach Jacob Braaten. With the graduation of seniors Lenny O’Neill, Peyton Monzon and Chris Brooks from last year’s team, as well as the loss of explosive backcourt player Isaac Guylfrede, who will play his senior season of high school basketball in Mayville this year, WTCS does not have a single senior on the roster for the 2019-2020 campaign.

Instead, the Crusaders will look to junior Caleb Babcock for leadership as he is the club’s most experienced player. At a shade over six feet tall, Braaten believes Babcock will be able to give WTCS a presence in the paint.

“I really like his work ethic, and his effort level on the defensive end of the floor,” Braaten tells the Williston Herald. “I think every coach wants a player like that.”

In addition to Babcock, the fifth-year WTCS basketball coach will also have multi-sport athlete Colby Grindeland, a sophomore, in the front court. With both players being over six foot, Braaten envisions their size to be a big advantage for the Crusaders as the season gets underway.

“Those two will be our tall boys in the lineup. I’m expecting their length and athletic ability will help us defend, and also help us out on the boards as well,” Braaten adds.

Other rotational player on this year’s Crusaders will include freshman point guard Dawson Fleck, who comes into the season with varsity experience. Coach Braaten believes Fleck, as well as Derek Lee, an athletic soccer player, will play extended minutes together in the backcourt this season. More specifically, Braaten says he is quite encouraged with the progress Fleck has made improving his game over the past couple of seasons.

“You can really see how passionate he is about the game of basketball. He’s put in a ton of hours developing his ball handling and shooting skills, and I can definitely see he’s consistently getting better,” the WTCS coach said of Fleck.

When coaching such a young roster, Braaten stresses the importance of setting small goals, such as having a good offensive possession, locating a quality shot within the flow of the offense, and boxing out an opponent to secure a rebound. Once those tasks can be accomplished with consistency at the varsity level, playing a solid half, and ultimately a solid game, will be able to happen naturally.

“With no upperclassmen, this year will be brand new territory for the players, and for me, so I am excited to see what we can put together,” the WTCS basketball mentor continues. “I have preached to them that this year is not about wins and losses, instead, we are just focused on being a team and building off of that.” 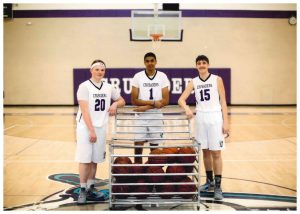 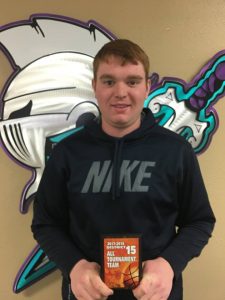 2017-2018 Season:  Congratulations to WTCS senior Kaleb Cornell for being named to the District 15 All Tournament Basketball Team!