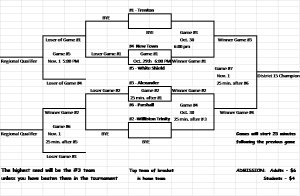 On Monday, October 22, in their last game at home this season, the Williston Trinity Christian School’s Lady Crusaders took on the Tioga Pirates.  It was an exciting game with the CRU winning in 5 sets!

The Crusaders have five seniors on their varsity team this year:  Ilyssa Sanford, Madi Schell, Ashton Pierce, Kaia Poole, and Elizabeth Thomas.  These ladies have led their team to a conference record of 7-2 and a season record of 9-5 with head coach Staci Haugen and assistant coach LaLynda Blotsky.

“There is a lot of individual talent on the team this year,” says Head Coach Staci Haugen, “and when they play together as a team they do so well. I’m looking forward to districts. We have 5 seniors on Varsity that this will be their last district tournament.  I hope that we come ready to play and play cohesively as a team.”

Crusaders first district tournament game is Tuesday, October 30th at approximately 7:00pm against the winner of the Alexander-Parshall game.

This entry was posted in Events, Featured, News, Other, Parents, Sports. Bookmark the permalink.