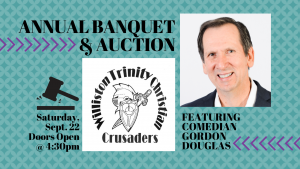 Tickets are $25 & are available for purchase at Williston Trinity Christian School. Doors open for the silent auction at 4:30pm. Dinner is served at approximately 6:00pm.

If you are interested in being a sponsor for our banquet and/or donating an item for this year’s auction, please contact the school office at 701-774-9056 or send us a message.

Who is Gordon? He is someone who lives and loves to laugh! His comedy skills took him from the nightclubs in Philadelphia to Hollywood – and then ended up in ministry!

Learning from his comedy hero Red Skelton, Gordon’s comedy mixes real life stories with “off the wall” physical comedy and his own hilarious view of life. He helps us see the funny things all around us and find joy no matter what we are going through.

Besides his vast comedy background, Gordon was named Who’s Who in America’s Universities when he graduated from Philadelphia Biblical University in 1995. For the last 20 years Gordon has served as the head of the pastoral board of the Delaware County Pregnancy Center and regional coordinator of the National Day of Prayer. In his spare time he is still the President of Therapeutic Construction and Design- making custom equipment for folks with disabilities. In honor of his hero Bob Hope, Gordon started Operation Bellylaughs, sending comedy DVDs to the troops.

Gordon Douglas has been married to his wife Dawn for over 35 years. They have five natural children and have opened their hearts and home to a whole lot more.

This entry was posted in Events, Featured, News, Other, Parents. Bookmark the permalink.